What type of plugs and sockets are used in Belgium?

When you are going on a trip to Belgium, be sure to pack the appropriate travel plug adapter that fits the local sockets. But what do those electrical outlets look like? In Belgium, types C and E are the official standards. Unlike almost all other European countries, Belgium has standardized on the French plug and socket system. Fortunately, this does not pose a problem since the French standard is fully compatible with the German type F system, which is used in the rest of Continental Europe.


What is the mains voltage in Belgium?

Just like the rest of Europe, the voltage in Belgium is 230 volts and the frequency is 50 Hz. 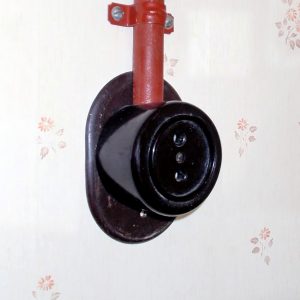 Belgium has standardized on type E sockets and plugs. Type C and type F plugs can also be used thanks to their compatibility with type E sockets. However, it is not permitted to install type C nor type F wall outlets. But why is that?

Typically, type C plug sockets are not allowed to be installed in Belgium: these outlets are not earthed and are therefore considered dangerous. Only type E power points are permitted because they are grounded and therefore significantly safer.

The only (and rare) exception to this rule is that an old type C outlet should be replaced by a new one. After all, if you hook up a grounded wall outlet (i.e. type E) on a two-wire circuit, the socket will not be grounded, but people will get the wrong impression that it is actually grounded. No need to say, this would be a potentially dangerous situation.

Nowadays, however, type C receptacles are not frequently installed anymore, since older properties are almost always completely rewired when they are renovated or significantly altered. 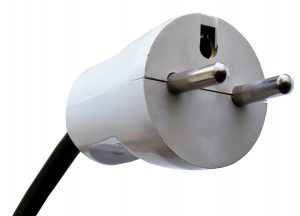 Obsolete type E plug, i.e. without top and bottom earthing clips nor plastic notches on the left and right.

Most European countries don’t have the same plug and socket standard as Belgium; they use the German type F system instead. This used to be a problem because type E plugs and sockets were initially incompatible with type F. The reason for the incompatibility was that grounding in the type E socket is accomplished with a round male pin, which is permanently mounted in the socket. Type F outlets, on the other hand, are earthed by means of two sprung metal strips on the inside edge of the recessed socket which make a friction connection with similar metal strips on the sides of the plug body.

Fortunately, the now standard hybrid E/F plug (officially called CEE 7/7) was developed in order to bridge the differences between E and F sockets, so technically type E and F plugs (not the sockets) have now become 100% identical.

It is not allowed to install type F sockets in Belgian properties, even though they are equally safe and 100% compatible with type C and type E plugs. You can, however, occasionally encounter type F wall outlets or extension cords in Belgian web shops that have e.g. Dutch or German owners. Also kitchen units, which are often manufactured elsewhere in the European Union, sometimes have several type F plug sockets built in. Strictly speaking, this is not in compliance with electrotechnical regulations.

So why doesn’t Belgium allow the installation of type F sockets? There are probably both political and economic reasons.

Throughout the 19th and 20th centuries, Belgium looked to its neighbour France as a source of policy ideas and legislation, even if what France did was illogical in a broad European or global context. This explains why Belgium is one of only countries that standardized on the French type E socket; incidentally, it also explains why Belgium is (besides France) the only country in the world that uses the AZERTY keyboard lay-out.

The economic reason for not allowing type F sockets in Belgium is probably to protect its own domestic receptacle manufacturers and to limit competition to French firms. Other European companies currently only sell the universal Continental European type F wall outlets and are not really interested in producing type E plug sockets as well. Allowing the installation of type F receptacles would significantly increase competition for Belgian manufacturers.