The ‘normal’, most common type C plug, rated at 2.5 amperes, is only used for low energy-consuming appliances.

Type C is used in all countries of Europe except the United Kingdom, Ireland, Malta and Cyprus. (Click here for the full list of all countries that use type C)

Type C is the most widely used plug internationally. This two-wire plug is ungrounded, unpolarised and has two round prongs. It is popularly known as the Europlug which is described in CEE 7/16. The plug has two 4 mm round pins, measuring 19 mm in length on centres spaced 18.6 mm apart at the base and 17.5 mm apart at the tip. The two pins have 10 mm long insulated sleeves. They converge slightly, but they are relatively flexible which allows the plug to mate with any socket that accepts 4.0 – 4.8 mm round contacts on 17.5 – 19 mm centres. The plug is generally limited for use in class II applications that require 2.5 amps or less. 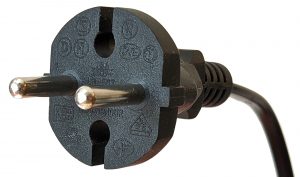 The 16 ampere version of the type C plug, used for high energy-consuming appliances.

There is also a second, less frequently used version of the type C plug (CEE 7/17), which is rated at either 10 A or 16 A. Its pins have the same length (19 mm) as the 2.5 amp version, but they are not insulated and have a slightly larger diameter (4.8 mm instead of 4 mm). Appliances that do not require earthing, but which are high energy-consuming, are almost always fitted with this kind of plug (e.g. hair dryers, bathroom heaters, vacuum cleaners, etc.). Please note that type N sockets, which are used in Brazil and South Africa, are incompatible with the 16 amp version of type C because of the shape of the plug. Type N sockets are recessed and hexagonally-shaped, and only accept hexagonally-shaped plugs.

Type C plugs are commonly used in all countries of Europe except in the United Kingdom, Ireland, Malta and Cyprus. They are also used in various parts of the developing world. Although type C plugs are used in so many places around the world, the opposite is true for type C sockets. This kind of socket is the older and ungrounded variant of the type E, F, J, K, L, N and O socket. Nowadays most countries demand grounded sockets to be installed in new buildings. Since type C sockets are unearthed, they have become illegal almost everywhere and they are being replaced by type E, F, H, J, K, L, N or O (depending on the country). So as to leave no doubt: only the sockets have become illegal, the plugs remain in use of course. The ‘normal’, 2.5 amp type C plug fits perfectly into a type E, F, H, J, K, L, N or O socket.