Why do some countries drive on the left and others on the right?

Why do some countries drive on the left and others on the right?

About a 35% of the world population drives on the left, and the countries that do are mostly old British colonies. 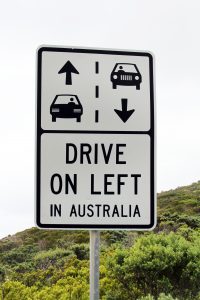 This strange quirk perplexes the rest of the world, but there is a perfectly good reason. Click here for a world map and a full list of all countries of the world and the side of the road on which they drive.

In the past, almost everybody travelled on the left side of the road because that was the most sensible option for feudal, violent societies. Since most people are right-handed, swordsmen preferred to keep to the left in order to have their right arm nearer to an opponent and their scabbard further from him. Moreover, it reduced the chance of the scabbard (worn on the left) hitting other people. 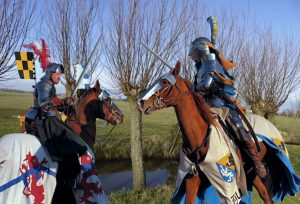 In the late 1700s, however, teamsters in France and the United States began hauling farm products in big wagons pulled by several pairs of horses. These wagons had no driver’s seat; instead the driver sat on the left rear horse, so he could keep his right arm free to lash the team. Since he was sitting on the left, he naturally wanted everybody to pass on the left so he could look down and make sure he kept clear of the oncoming wagon’s wheels. Therefore he kept to the right side of the road.

In Russia, in 1709, the Danish envoy under Tsar Peter the Great noted the widespread custom for traffic in Russia to pass on the right, but it was only in 1752 that Empress Elizabeth (Elizaveta Petrovna) officially issued an edict for traffic to keep to the right. In addition, the French Revolution of 1789 gave a huge impetus to right-hand travel in Europe. The fact is, before the Revolution, the aristocracy travelled on the left of the road, forcing the peasantry over to the right, but after the storming of the Bastille and the subsequent events, aristocrats preferred to keep a low profile and joined the peasants on the right. An official keep-right rule was introduced in Paris in 1794, more or less parallel to Denmark, where driving on the right had been made compulsory in 1793.

Later, Napoleon’s conquests spread the new rightism to the Low Countries (Belgium, the Netherlands and Luxembourg), Switzerland, Germany, Poland and many parts of Spain and Italy. The states that had resisted Napoleon kept left – Britain, the Austro-Hungarian Empire and Portugal. This European division, between the left- and right-hand nations would remain fixed for more than 100 years, until after the First World War. 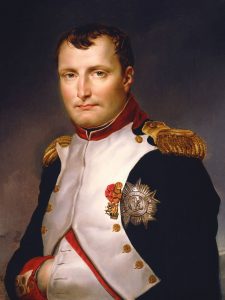 Although left-driving Sweden ceded Finland to right-driving Russia after the Finnish War (1808-1809), Swedish law – including traffic regulations – remained valid in Finland for another 50 years. It wasn’t until 1858 that an Imperial Russian decree made Finland swap sides.

The trend among nations over the years has been toward driving on the right, but Britain has done its best to stave off global homogenisation. With the expansion of travel and road building in the 1800s, traffic regulations were made in every country. Left-hand driving was made mandatory in Britain in 1835. Countries which were part of the British Empire followed suit. This is why to this very day, India, Australasia and the former British colonies in Africa go left. An exception to the rule, however, is Egypt, which had been conquered by Napoleon before becoming a British dependency.

Japan was never part of the British Empire, but its traffic also goes to the left. Although the origin of this habit goes back to the Edo period (1603-1868), it wasn’t until 1872 that this unwritten rule became more or less official. That was the year when Japan’s first railway was introduced, built with technical aid from the British. Gradually, a massive network of railways and tram tracks was built, and of course all trains and trams rode on the left-hand side. Still, it took another half century till in 1924 left-side driving was clearly written in a law.

In the early years of English colonisation of North America, English driving customs were followed and the colonies drove on the left. After gaining independence from England, however, they were anxious to cast off all remaining links with their British colonial past and gradually changed to right-hand driving. Incidentally, the influence of other European immigrants, especially the French, should not be underestimated. The first law requiring drivers to keep right was passed in Pennsylvania in 1792, and similar laws were passed in New York in 1804 and New Jersey in 1813. 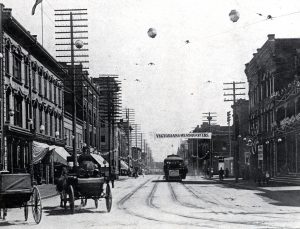 Horse and carriage on the left side of the road in Hastings Street, Vancouver, British Columbia (1880)

Despite the developments in the US, some parts of Canada continued to drive on the left until shortly after the Second World War. The territory controlled by the French (from Quebec to Louisiana) drove on the right, but the territory occupied by the English (British Columbia, New Brunswick, Nova Scotia, Prince Edward Island and Newfoundland) kept left. British Columbia and the Atlantic provinces switched to the right in the 1920s in order to conform with the rest of Canada and the USA. Newfoundland drove on the left until 1947, and joined Canada in 1949.

In Europe, the remaining left-driving countries switched one by one to driving on the right. Portugal made the switch in 1928. The change took place on the same day in the whole country, including the colonies. Territories, however, which bordered other left-driving countries were exempted. That is why Macau (now a special administrative region of China), Goa (now part of India) and Portuguese East Africa (now Mozambique) kept the old system. East Timor, which borders left-driving Indonesia, did change to the right though, but left-hand traffic was reintroduced by the Indonesians in 1975.

In Italy the practice of driving on the right first began in the late 1890s. The first Italian Highway Code, issued on 30 June 1912, stated that all vehicles had to drive on the right. Cities with a tram network, however, could retain left-hand driving if they placed warning signs at their city borders. The 1923 decree is a bit stricter, but Rome and the northern cities of Milan, Turin and Genoa could still keep left until further orders from the Ministry of Public Works. By the mid-1920s, right-hand driving finally became standard throughout the country. Rome made the change on the 1 of March 1925 and Milan on 3 August 1926.

Up till the 1930s Spain lacked national traffic regulations. Some parts of the country drove on the right (e.g. Barcelona) and other parts drove on the left (e.g. Madrid). On the 1st of October 1924 Madrid switched to driving on the right. 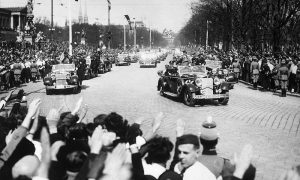 When the Nazis marched into Austria on 12 March 1938, Hitler ordered all of Austria to switch to driving on the right.

The break-up of the Austro-Hungarian Empire caused no change: Czechoslovakia, Yugoslavia and Hungary continued to drive on the left. Austria itself was something of a curiosity. Half the country drove on the left and half on the right. Not surprisingly, the dividing line was precisely the area affected by Napoleon’s conquests in 1805.

The Austrian states of Vorarlberg, Tyrol and Carinthia, as well as the western half of Salzburg switched to driving on the right between 1921 and 1935. When Germany annexed Austria in 1938, Hitler ordered the rest of Austria to make the switch overnight. The change threw the driving public into turmoil, because motorists were unable to see most road signs. In Vienna it proved impossible to change the trams overnight, so while all other traffic took to the right-hand side of the road, the trams continued to run on the left for several weeks. Czechoslovakia and Hungary, among the last states on the mainland of Europe to keep left, changed to the right after being invaded by Germany in 1939 and late 1944 respectively.

Meanwhile, the power of the right kept growing steadily. American cars were designed to be driven on the right by locating the drivers’ controls on the vehicle’s left side. With the mass production of reliable and economical cars in the United States, initial exports used the same design, and out of necessity many countries changed their rule of the road.

Gibraltar changed to right-hand traffic in 1929 and China in 1946. Since neighbouring Hong Kong was a British colony at the time, it continued to keep to the left. When China resumed control over the city in 1997, after 156 years of British colonial rule, the ‘Basic Law’ was adopted, guaranteeing that Hong Kong’s “way of life” will remain unchanged until 2047…

Korea now drives right, but only because it passed directly from Japanese colonial rule to American and Russian influence at the end of the Second World War. Pakistan also considered changing to the right in the 1960s, but ultimately decided not to do it. The main argument against the shift was that camel trains often drove through the night while their drivers were dozing. The difficulty in teaching old camels new tricks was decisive in forcing Pakistan to reject the change. Nigeria, a former British colony, had been driving on the left with British imported right-hand-drive cars, but when it gained independence, it wanted to throw off its colonial past and shifted to driving on the right in 1972.

After the Second World War, left-driving Sweden, the odd one out in mainland Europe, felt increasing pressure to change sides in order to conform with the rest of the continent. The problem was that all their neighbours already drove on the right side and since there are a lot of small roads without border guards leading into Norway and Finland, one had to remember in which country one was.

In 1955, the Swedish government held a referendum on the introduction of right-hand driving. Although no less than 82.9% voted “no” to the plebiscite, the Swedish parliament passed a law on the conversion to right-hand driving in 1963. Finally, the change took place on Sunday, 3 September 1967, at 5 o’clock in the morning. The day was referred to as Dagen H or, in English, H day. The ‘H’ stands for ‘Högertrafik’, the Swedish word for ‘right-hand traffic’. All traffic with private motor-driven vehicles was prohibited four hours before and one hour after the conversion, in order to be able to rearrange all traffic signs. Even the army was called in to help. Also a very low speed limit was applied, which was raised in a number of steps. The whole process took about a month to prepare. In the video on the left, you can watch the actual switch taking place at 5 AM.

After Sweden’s successful changeover, Iceland changed the following year, in 1968. On 2 April 1972 Nigeria swapped sides and Ghana did the same thing in 1974.

In the 1960s, Great Britain had also considered changing, but the country’s conservative powers did everything they could to nip the proposal in the bud. Furthermore, the fact that it would cost billions of pounds to change everything round was not much of an incentive… Eventually, Britain dropped the idea. Today, only four European countries still drive on the left: the United Kingdom, Ireland, Cyprus and Malta. 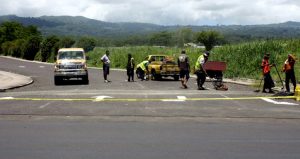 On 7 September 2009 the Independent State of Samoa (not to be confused with American Samoa !) became the third country ever to change from right- to left-hand driving. Samoa had been driving on the right since it had become a German colony in the early 20th century, although it was administered by New Zealand after the First World War and gained independence in 1962. Prime Minister Tuilaepa Sailele Malielegaoi wanted to swap sides to make it easier to import cheap cars from left-hand driving Japan, Australia and New Zealand.

Click here for a full list of all countries of the world and the side of the road each of them drives on.

Click here to find out why the steering wheel is on the left side of the car in right-driving countries and vice versa.