Power plug & outlet Types A & B

There are two types of domestic wall outlets in use in the US, Canada, Japan and Central America: the ungrounded type A (NEMA 1-15) and the grounded type B (NEMA 5-15). (The full list of countries that use types A & B can be found here.) 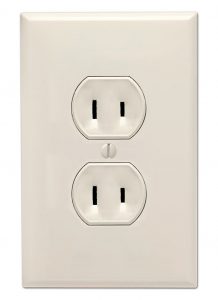 This class II ungrounded plug with two flat parallel prongs is pretty much standard in most of North and Central America. It is known as NEMA 1-15 and was invented in 1904 by Harvey Hubbell II. The plug has two flat 1.5 mm thick blades, measuring 15.9 – 18.3 mm in length and spaced 12.7 mm apart. Type A plugs are generally polarised and can only be inserted one way because the two blades do not have the same width. The blade connected to neutral is 7.9 mm wide and the hot blade is 6.3 mm wide. This plug is rated at 15 A. Since 1965, ungrounded type A outlets are not permitted anymore in new constructions in the United States and Canada, but they can still be found in older buildings.

Type A and B plugs have two flat prongs with (often, but not always) a hole near the tip. These holes aren’t there without a reason. If you were to take apart a type A or B socket and look at the contact wipers that the prongs slide into, you would find that in some cases they have have bumps on them. These bumps fit into the holes so that the outlet can grip the plug’s prongs more firmly. This prevents the plug from slipping out of the socket due to the weight of the plug and cord. It also improves the contact between the plug and the outlet. Some sockets, however, do not have those bumps but just two spring-action blades that grip the sides of the plug pin, in which case the holes are not necessary. 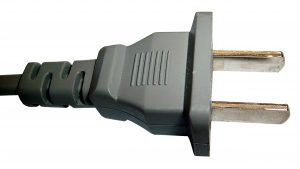 There are also some special outlets which allow you to lock the cord into the socket, by putting rods through the holes. In this way, vending machines and the like cannot be unplugged. Moreover, electrical devices can be factory-sealed by the manufacturer using a plastic tie or a small padlock through one or both of the plug prong holes. For example, a manufacturer might apply a plastic band through the hole and attach it to a tag that says: “You must do X or Y before plugging in this device”. The user cannot plug in the device without removing the tag, so the user is sure to see the tag. 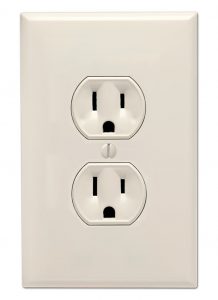 This class I plug is designated as American standard NEMA 5-15. It has two flat 1.5 mm thick blades, spaced 12.7 mm apart, measuring 15.9 – 18.3 mm in length and 6.3 mm in width. It also has a 4.8 mm diameter round or U-shaped earth pin, which is 3.2 mm longer than the two flat blades, so the device is grounded before the power is connected. The centre-to-centre distance between the grounding pin and the middle of the imaginary line connecting the two power blades is 11.9 mm. The plug is rated at 15 amps. 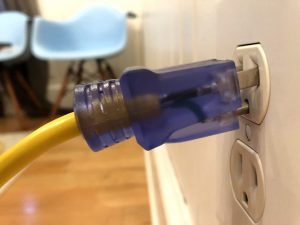 In some parts of Central and South America, grounded type B outlets are still rather uncommon. Therefore people often simply cut off the earth pin of a type B plug in order to mate it with a two-pole ungrounded socket.

Type A and B plugs are not insulated (i.e. the pin shanks are not sleeved; they do not have a black covering towards the plug body like type C, G, I, L or N plugs) and the outlets are not recessed into the wall, which means that if a the plug is pulled halfway out, its prongs are still connected to the socket. Type A and B sockets are notoriously dangerous, since the distance between the receptacle and a partially pulled-out plug is big enough to touch the pins with your fingers or with a metal object such as a teaspoon.