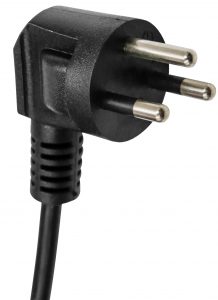 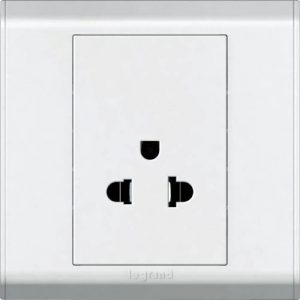 All sockets that are currently sold are hybrid ones.

Type O is used exclusively in Thailand. (Click here for the full list of all countries of the world with their respective plugs/sockets)

The type O plug, rated at 16 amps, is one of the official standards in Thailand. The standard is described in TIS 166-2549 (incidentally, the last four digits refer to the Buddhist year 2549, which corresponds to the year 2006 in the Gregorian calendar).

Type O consists of two power pins and an earth pin, which are round and have a 4.8 mm diameter. The power pins measure 19 mm in length, they have 10 mm long insulated sleeves and their centres are spaced 19 mm apart. The earth pin has a length of 21.4 mm. The centre-to-centre distance between the grounding pin and the middle of the imaginary line connecting the two power pins is 11.9 mm, which is exactly the same distance as in type B plugs. This is not a coincidence, since the hybrid version of this socket was designed to accommodate plug types A, B, C and O. In the long run, compatibility with American plugs is planned to be phased out, since the electrical network in Thailand operates at 230 V. For now, type O outlets only exist on paper. All sockets that are currently sold are hybrid ones, which are compatible with types plug types A, B, C and O. 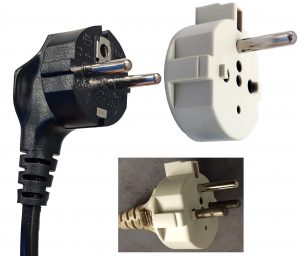 Although they look similar, type O plugs are not interchangeable with the Israeli type H or the Danish type K power plugs. However, there is a very unsafe compatibility between type O sockets and type E/F plugs, which is why in 2008 the Thai Government banned the sale of appliances fitted with E/F plugs. When used in Thailand, an E/F plug will not be grounded and when such a plug is partially pulled out, you will be able to touch the prongs while they are still live! Since many Thai people still have household appliances fitted with E/F plugs, a special plug adapter was introduced. It ensures that E/F plugs are earthed when plugged into a Thai hybrid outlet.

For now, type O outlets only exist on paper. All sockets that are currently sold are hybrid ones.

As mentioned before, the type O plug and socket system was introduced in 2006, but can somebody please enlighten me as to why on earth a country would develop a whole new electric standard when there are several alternatives available? Standardizing on type F would have been self-evident: it is an extremely safe system and it is compatible with plug types C and E/F, which are frequently used in Thailand. As the Thai Government is going to phase out compatibility with the American plug types A and B anyway, why haven’t they adopted the type F standard, while at the same time allowing for a period of transition where hybrid B/F-receptacles as well as type F sockets may be installed? This is absolutely mind-boggling!