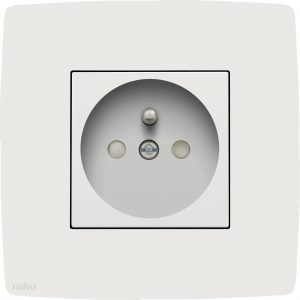 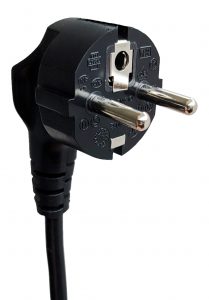 Type E is primarily used in France, Belgium, Poland, Slovakia, the Czech Republic, Tunisia and Morocco. (Click here for the full list of all countries that use type E)

France, Belgium and some other countries have standardized on a socket which is different from the CEE 7/4 socket (type F) that is standard in Germany and other continental European countries. Fortunately, type F plugs are fully compatible with type E sockets and the other way round. In the past, however, this wasn’t the case. The reason for the initial incompatibility was that grounding in the E socket is accomplished with a round male pin, which is permanently mounted in the socket. Old type F plugs did not have a grounding hole to accept the earth pin of the type E socket. This grounding pin is 14 mm long and has a diameter of 4.8 mm. The plug itself is similar to C except that it is round and has the addition of a female contact to accept the socket’s grounding pin. The plug has two 4.8 mm round pins, measuring 19 mm in length on centres spaced 19 mm apart. The centre-to-centre distance between the female contact and the middle of the imaginary line connecting the two power pins is 10 mm.

In order to bridge the differences between sockets E and F, the now universal Continental European standard E/F plug was developed, officially called CEE 7/7. It has top and bottom indentations with earthing clips in them to mate with the type F socket and it has a female contact to accept the grounding pin of the type E socket. The hybrid E/F plug is not perfectly round, but has a pair of plastic notches on the left and right side to fit the type F socket.

Obsolete type E plug, i.e. without top and bottom earthing clips nor plastic notches on the left and right.

The original type E plug, which is round and does not have grounding clips, is no longer used. However, very rarely it can still be found on some older appliances. Note that the CEE 7/7 plug is polarised when used with a type E outlet. The plug is rated at 16 amps. Above that, equipment must either be wired permanently to the mains or connected via another higher power connector such as the IEC 60309 system. A type C plug fits perfectly into a type E socket. The socket is recessed by 15 mm, so partially inserted plugs do not present a shock hazard.


Check out all other plug types used around the world