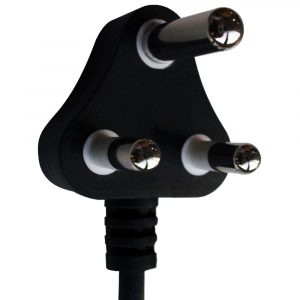 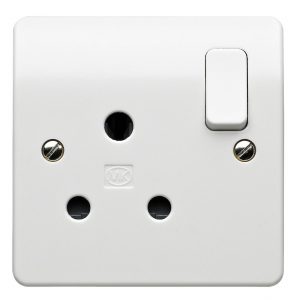 Type M is used almost exclusively in South Africa, Swaziland and Lesotho. (Click here for the full list of all countries that use type M)

This plug resembles the Indian type D plug, but its pins are much larger. Type M is a 15 amp plug, and it has three round prongs that form a triangle. The central earth pin is 28.6 mm long and has a diameter of 8.7 mm. The 7.1 mm line and neutral pins are 18.6 mm long, on centres spaced 25.4 mm apart. The centre-to-centre distance between the grounding pin and the middle of the imaginary line connecting the two power pins is 28.6 mm. The South African version of the M plug often has insulated sleeves on the pins to prevent accidental contact with a bare connector while the plug is partially inserted.

Although type D is used in India and Nepal, type M is also used for larger appliances in those countries. Some sockets over there can take both type M and type D plugs. Type M is also used in Israel and the United Arab Emirates for heavy appliances such as air-conditioning circuits (in cases where wall-mounted units are plugged in to a dedicated socket) and certain types of washing machines. In the UK, type M is still pretty much the standard plug for theatre installations, despite efforts to move to the international blue- and red-coloured industrial CEE plugs.

Incidentally, in 2013, South Africa made the new type N plugs and sockets the preferred standard, which will gradually replace the type M plug and socket system. Since 2018, all new buildings in South Africa must incorporate at least one type N socket outlet. Erm, come again? Only one single receptacle of the preferred standard? This is mind-boggling! Why would a government deliberately opt for an excruciatingly slow adoption of a new, safer standard? No wonder the South African Bureau of Standards (SABS) thinks the transition process will only be completed in 20 to 50 (!) years! This is utterly absurd…