Why isn’t there a universal standard electric plug?


Why isn’t there a universal standard electric plug? 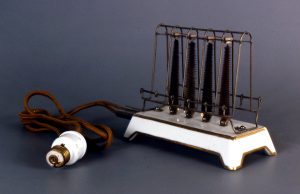 A 1909 toaster with a lightbulb socket

When electricity was first introduced into the domestic environment it was primarily for lighting. However, as it became a viable alternative to other means of heating and also the development of labour-saving appliances, a means of connection to the supply other than via a light socket was required. In 1883, the two-prong electric plug was invented by TT Smith.

At that time, some electricity companies operated a split tariff system where the cost of electricity for lighting was lower than that for other purposes, which led to low wattage appliances (e.g. vacuum cleaners, hair dryers, etc.) being connected to the light fitting. The picture shows a 1909 electric toaster with a lightbulb socket plug (an Edison screw fitting, to be exact).

As the need for safer installations grew, three-pin outlets were developed. The third pin on the outlet was an earth pin, which was effectively connected to earth, this being at the same potential as the neutral supply line. The idea behind it is that in the event of a short circuit to earth, a fuse will blow, thus disconnecting the supply.

The reason why the world is now stuck with no less than 15 different styles of plugs and wall outlets, is because many countries preferred to develop a plug of their own, instead of adopting the US standard. In one sense those countries were actually right, though: the wobbly American plugs and their uninsulated prongs are almost prehistoric in terms of design and they are notoriously unsafe.

For decades, the International Electrotechnical Commission (IEC) tried to develop a universal domestic power plug, but time and again political and economic issues threw a spanner in the works. In 1986, the IEC finally presented the universal standard plug (type N) to the world, but unfortunately the initial enthusiasm had dampened. It wasn’t until 2007 that Brazil became the first country in the world to adopt type N as its standard wall outlet and plug top. The establishment of type N as the sole standard was motivated by the urge to sort out the motley collection of plugs in use throughout the country.

Many Latin-American, African and Asian countries are still in the same situation that Brazil used to be in. Some of those countries have taken a short-sighted approach by allowing so-called “universal” or “multi-standard” wall outlets to be installed in properties in order to solve the problem, but those often violate basic safety standards. Standardizing on type N (or another safe and preferably widely used earthed plug system such as F, G or I, for that matter) should of course be self-evident. But some countries just never learn. In 2006, Thailand deemed it necessary to develop a whole new power outlet system of its own, albeit compatible with type C, which is currently gradually being phased in. The mind boggles!

Click here for pictures and descriptions of all 15 plug and receptacle types for domestic use.

Click here for a list of the countries of the world with their respective plug and outlet types, voltage and frequency.