What type of plugs and sockets are used in South Africa?

When you are going on a trip to South Africa, be sure to pack the appropriate travel plug adapter that fits the local sockets. But what do those electrical outlets look like? The type N socket and plug are the official standard in South Africa. Type C plugs are also official, but not type C sockets. This does not pose a problem, however, since type C plugs are 100% compatible with type N sockets. The older type M standard is being phased out, but is still ubiquitous.


What is the mains voltage in South Africa ?

In South Africa, the standard voltage is 230 volts and the frequency is 50 Hz. 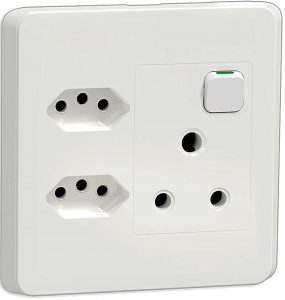 Due to the large volume of imported appliances equipped with incompatible types of plugs, virtually everybody has started using plug adapters in order to fit type M sockets. Especially the need for a safer electric environment and the massive presence of European plugs (type C and type F) contributed to the South African government’s decision to introduce a new type of plug and socket system, which will gradually replace the old type M. The process, however, has been painfully slow.

Talk of adopting the new standard began in 1993 and type N officially became “one of the South African plug standards” in 2006. In 2013, South Africa decided to make type N the “preferred plug and socket standard”, but still, not much happened. Moreover, the country still does not seem to be in much of a hurry to encourage the quick adoption of this new standard. Since 2018, all new buildings in South Africa must incorporate at least one type N socket outlet. Erm, come again? Only one? Seriously? One single receptacle of the “preferred” standard will do? This is absolutely mind-boggling! Why would a government deliberately opt for an excruciatingly slow adoption of a more modern and safer standard? No wonder the South African Bureau of Standards (SABS) thinks the transition process will only be completed in 20 to 50 (!) years! This is utterly absurd…