What type of plugs and sockets are used in Israel?

When you are going on a trip to Israel, be sure to pack the appropriate travel plug adapter that fits the local sockets. But what do those electrical outlets look like? In Israel, types C and H are the official standards.


What is the mains voltage in Israel?

Just like the rest of the Middle East and Europe, the voltage in Israel is 230 volts and the frequency is 50 Hz. 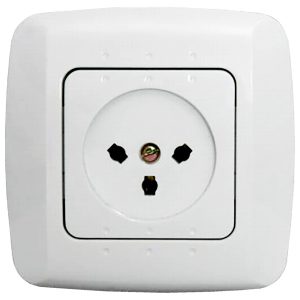 Israel has standardized on type H sockets and plugs. Nowadays, type C plugs can also be used thanks to their compatibility with type H sockets.

This was not the case before 1989, when the Israeli plug still had flat prongs. Power outlets made since 1989 accept both flat and round pin plugs. The original flat-bladed type H plugs have now become obsolete, but they can still occasionally be found. This plug is also used in the West Bank and all of the Gaza Strip.

Strictly speaking, type H sockets are incompatible with type E or type F plugs, because the diameter of the Israeli socket contacts is 0.3 mm smaller than the prongs of E/F plugs. However, if you push really hard, you can often force such plugs into an Israeli outlet. Bear in mind, though, that the appliance will not be earthed and that it is very hard to pull the plug back out!

Type C plugs are frequently used in Israel. It is illegal, however, to install type C power outlets: these receptacles are not earthed and are therefore considered dangerous. Only type H power points are permitted because they are grounded and therefore significantly safer.