What type of plugs and sockets are used in Ireland?

When you are going on a trip to the Irish Republic, be sure to pack the appropriate travel plug adapter that fits the local sockets. But what do those electrical outlets look like? In Ireland, type G is the official standard. Unlike almost all other European countries, the Republic of Ireland has standardized on the British plug and socket system, which is incompatible with the power outlet system used in Continental Europe.


What is the mains voltage in Ireland?

Just like the rest of Europe, the voltage in the Irish Republic is 230 volts and the frequency is 50 Hz. 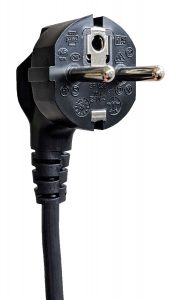 Type G plugs and sockets started appearing in the United Kingdom in 1946 and the standard was first published in 1947. By the end of the 1960s, it had replaced nearly all earlier type D and type M outlets (BS 546) in British homes. In the Republic of Ireland, however, there was no clear standard and both the German Schuko (type F) and the British type G systems were commonly installed until the late 1960s. For safety reasons — having two incompatible standards is never a good idea — and to harmonize with Northern Ireland, type G was made the sole standard in 1973. The British Standard BS 1363 was transposed into Irish Standards as I.S. 401 (plug) and I.S. 411 (socket outlet). Nowadays, type F receptacles can still very occasionally be found in older properties.

Type G wall sockets almost always include switches for extra safety. UK plugs are no doubt among the safest in the world, but also among the most hulking and cumbersome. That’s why people often make fun of them saying that a British plug is mostly bigger than the appliance it is connected to… Moreover, the bottom-heavy design of the plug makes it a perfect caltrop.

The type G standard requires use of a three-wire grounded and fused plug for all connections to the power mains. Two-wire appliances are not earthed, but they have a plastic grounding pin which only serves to open the shutters of the outlet. The lack of such an earth pin on a type C plug makes it impossible to connect it to a type G receptacle, although it can actually be forced into the socket by sticking a pointy object into the centre hole of the power outlet, which opens up the two other holes. Just to be perfectly clear, this is not a piece of advice; it’s simply an observation…